How and Where Golf Started

The History of Golf Balls

How To Swing Hickory Golf Clubs

The Rarity of Golf Defined How and Where Golf Started

Golf History (and more specifically origin) is still a disputed topic today, but we can begin with the Dutch derivation by means of paintings, prints and photographs.  The game was played and represented with a variety of conditions and costumes.  For example, it was played in church yards, on the streets and roads, on the fields during harvest and even on the ice in the winter!

Who brought it to Scotland? It may have been soldiers or sailors. There were many Scottish mercenary soldiers in Holland and dozens of marriages with Dutch girls are recorded.  Scotland’s main export was wool and if the wind was unfavorable Scottish sailors would be forced to stay in Holland for days or weeks.  Two kilted players with clubs can be seen in a 1668 Van der Velde painting.

The flowerings of Dutch landscape paintings coincided with the popularity of the game in most outdoor scenes with at least one figure carrying a club.  In 1700 the game disappeared and was succeeded by an indoor variation.

The spread to Scotland from Holland looks likely when the early Scottish links are marked on a map.  They are all near the east coast parts of Dunbar, North Berwick, Aberlady, Musselburgh, Leith, Elie, St. Andrews, and so on up the coast to Dornoch. The earliest inland golf was at Bruntsfield Links, just south of Edinburgh Castle.

Rabbits and grass vied for existence in these rolling links.  Smooth areas nibbled short and marked by rabbit “scrapes” (the 1st hole?) alternated with rough grass.  The “greens” were connected by sheep paths of varying widths. Rabbits and sheep were therefore the first golf course architects.

15th century Elizabethan golf (known as “Bandy Ball”, “Gowf” on the Scottish countryside.  The word golf, is most likely an alteration of the Dutch “colf” or “colve” (“stick, “club”, “bat”). Kolven refers to a Dutch game where the lowest number of strokes needed to hit a ball with a mallet determines the winner.

The first clear written golf history / documentation for Scotland appears in Acts of Parliament between 1457 and 1491 in which the King prohibited the playing of “gowf” and “futball.” Golf was described as “an unprofitable sport”.

18th century golf history on display in the Scottish countryside.  At first, golf was played in any convenient open area. But in time preferred spots evolved into “links”. The “Old Links” at Musselburgh is thought to be the oldest golf course in the world. This is documented by notes in the account book of Sir John Foulis of Ravelston, dated March 2, 1672. Mary, Queen of Scots, may have played there in 1567 as well.  Source usakilts.com

The featherie (“feather”) golf ball was used until around 1850 . It was a leather stitched case stuffed with a top hat full of boiled chicken or goose feathers. It was a skilled and arduous job to make a feather ball and a skilled tradesman could only complete two or three in a day. This made them as expensive as a club and controlled, to some extent, the popularity of golf making it very difficult for all but the rich to afford.  Because the featherie was easily damaged by iron clubs, irons were only used in sand or in a rut’.

The player carried nearly all wooden clubs and there was a great variation of loft and length. The first club makers were bow makers who fashioned beautiful delicate woods and carpenters who made heavier clumsier clubs. There were no “sets” of clubs as the player chose or ordered them to his or her preference, and no two clubs made before 1890 were exactly the same. The heads were long, narrow and shallow with a concave or “hooked” face. They were made of beech, apple, pear or thorn. The shafts were ash or hazel until about 1830 when hickory was found to make much better shafts.

A long diagonal splice or “scare” known as “scared head” clubs’ attached the wood heads to the shaft.  Lead was poured into the back and a strip of horn was fitted into the leading edge of the sole.  Interestingly, very early clubs had no grips as the shafts were thick enough to grip. Sheepskin was used as a grip from about 1800. Leather become popular much later, about 1880.  Blacksmiths made early irons which were heavy and cumbersome. They were only used “in extremis” for fear of damaging the leather cover of the feather ball. The hosel was thick and the shaft fit into the socket’ which was “knurled” to help grip the wood shaft. The cruder the “nicks” – the earlier the iron.

During the featherie era there were two main irons, the sand iron with a large concave face and the rut iron with a very small head to play out of the tracks formed as carts brought back sand from the beach.

To her sporting credit, Queen Mary of Scots may have introduced the game to France while she was there. Popular lore holds that the term ‘caddie’ stems from the nickname given to her assistants, who were cadets of the the French military.  Source usakilts.com

The courses at this time were as nature made them. There was very little green keeping and they played the ball as it lay. Rules were simple and about 14 in number. Stroke play was very rare, match play was almost always the game. There were few societies, with only 17 being formed by 1850. Dress was a personal choice except that most societies mode the wearing of red jackets compulsory so that golfers could be seen easily on the busy links. Coloured facings and lapels were often inscribed and silver or brass buttons with club insignia and motto were increasingly popular.

What Did Early Golfers Wear?

ln the “feathery” era, red coats with swallow tails and even the occasional top hat were seen.

A man’s everyday suit was considered correct and the ladies wore the long skirted gowns that were fashionable at the time.  It was rare to see an unbuttoned jacket before 1920.  Waterproof clothing and spike shoes are fairly recent innovations. 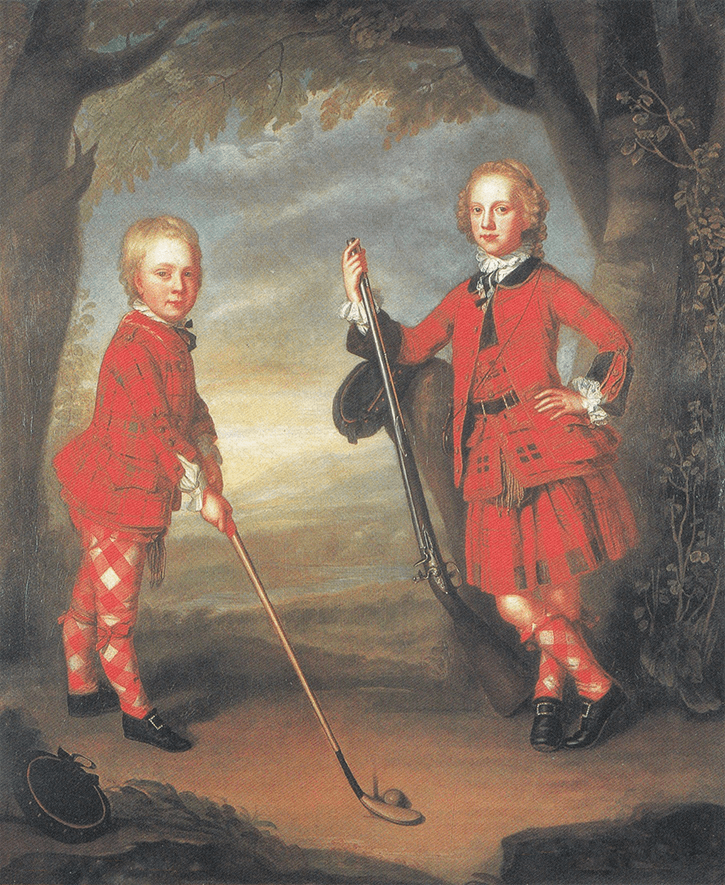 The History of Golf Balls

The progression of golf balls has been quite interesting from a golf history perspective.  Each time a new ball was introduced the game was revolutionized for players. Ignoring the stones that early shepherds reportedly hit into holes, the first golf balls were wood, most likely beech, boxwood or another type of hardwood. ‘A Gourlay’ as they called them, made reference to a quality featherie golf ball throughout the first half of the 19th century.  There were three generations of Gourlay (starting with William) who made featherie (or feathery) balls up to 1850, when the gutty replaced the featherie.  This specific ball happens to be a J. Gourlay which stood for John.  John was William’s middle brother who was believed to lead the sale and marketing efforts whilst William focused on manufacturing.  This ball dates from the early to mid 1800’s.

How can we help your next Hickory Golf Event?

HOW TO SWING HICKORY GOLF CLUBS

Not all hickory clubs are made equal!

Hickory shafts being made from natural timber will flex and twist much more than a modern club and display a much greater range of performance variation.  It’s hard to believe but  two identical “looking” clubs could actually have vastly different playing characteristics!

To increase the natural “whip” of your hickory shaft and minimize the twist of the club head at impact a smooth swing will more frequently deliver results. Be sure not to swing aggressively – this is the key to playing well with hickory clubs.

Hickory woods  have a very shallow face compared to drivers today.  Expect to take a much lower tee than you would your modern driver.

Hickory irons are not designed to take large divots and will dig sharply into the ground rather than slide through the turf. Aim to take a shallow divot or pick the ball cleanly from the turf. How does such a  rare game become a global passion?

Well, we can’t quite answer that question other than giving credit back to the great game.  The number of clubs/societies worldwide increased from 17 to 4135 between 1850 – 1910.  To say that this game got popular would be one heck of an understatement! Feel free to drop us a line below